skip to main | skip to sidebar

And thou shall make it happen!!! We desperately need volunteers to mentor/teach them and funds to sponsor their education. contact@friendsofchildrentrust.org

Posted by Shrikanth Hampiholi at 11:33 PM No comments: Links to this post

Well, Mohana Priya, who completed BCom in June-2007, is also selected for Oracle! She started working just few weeks ago. Well, that's not all. Our first batch student Karthik, who scored 88% in 10th, 83% in PUC in science, completed his BE in Electrical and Electronics from UVCE has joined in iGate this month. This was his campus interview selection and his selection date was finally given as this month beginning. Great to see the confidence boost that he got after this.

Gopal [BCom final year], Shashikala [BSc 1st year] and Usha [MFA 1st year] got small amounts of scholarships for their consistent academic performance. Certainly they deserve a pat.
Posted by vravi at 7:31 PM No comments: Links to this post

As you know, Usha is being supported for her Master of Fine Arts at
Gulbarga. After she completed PUC when staying at Vatsalya, she was
supported for BFA at Chitra Kala Parishath. She is brave enough to go
to Gulbarga for her two year MFA.

This is certainly a very big moment for her as this is the first time her paintings are getting exhibited for public. Another major highlight is, 30% of the money which comes by selling the paintings would go towards supporting cancer research and cancer patients. That's a fantastic cause and gesture!!
Posted by vravi at 7:54 AM No comments: Links to this post

Some good news and and some not so good news. That's life.

BCom students completed their 5th semester exams on Monday. Most of them have holidays for five weeks. While some students plan to prepare for aptitude etc, few others might go to their villages and a short break. Everybody seems to have written exams reasonably but for one subject: computer applications. The reason for not being able to do well was: lost of questions were asked from Tally software, in which these students didn't have exposure. All the students yesterday requested that they want to go to Tally course. Since many jobs now a days require a knowledge of Tally, it was suggested that the students should decide about the course, fee etc in this week itself, let the volunteers know about the plans and join the course ASAP.

Dipankar Dutta, Pramila Joachim and Anu Kumar, volunteers from Oracle BootCamp came yesterday to St Teresa's to select students for the fourth batch. Yes, it is amazing to see the energy the volunteers bring in. The advice from previous BootCamp students [Nancy, Roopa Lakshmi and Sharada] strongly recommended the program to the new students. Following the last batch logistics, students from Prerana were also allowed to take part. The primarily consisted of BCom [around 20] and Diploma [around 20, all from Prerana]. Starting with introduction on BootCamp and time slot availability collection from students, stage is set to start the new batch - which might begin in January. Then there was a game [I don't know its name] whose objective was finally to give a message "In every communication, there will be key words and distractions. Understand the objective and catch or ignore parts of the content accordingly". Two teams of 20 each were asked to go from one end of the ground to another end. A bunch of old news paper sheets were given. The students are supposed to step only on those papers by putting them on the floor. They were supposed to device a strategy after discussing various alternatives. It was a very good team building exercise.

English classes for PUC-I have been going on for the last three weeks. The classes are conducted from 10.30am to 12.00 noon by a lecturer from MES college. This is a very good activity to bring them up to speed in improving the language barrier issues.

Bharat, [who is not financially supported by FoCh], had a partial paralysis stroke two weeks ago. Now he is recovering in BGS Global Hospital. He underwent many tests and fortunately he doesn't have to undergo any surgery. He goes to ACE for JEE/AIEEE coaching and is a bright student. He will have to be on medication for a long time.
Posted by vravi at 9:11 AM 1 comment: Links to this post

Well, "A" is out of station for six weeks or so. While he ensured he volunteered personally for the 'Disha' workshops, unfortunately we will miss his action for the exhibition. Remember his infamous speech (less??) during Disha'04 presentation ceremony? "Disha" is a separate topic on its own and hence let's come back to it in a separate discussion.

Not many mails on egroup for last few months. We are missing quite a few updates. There has been lot of good news and updates to share with. Given that it is already close to six months since we started supporting new batch of PUC students, now is the time probably to keep documenting what happened. We might get some time as we now know which students are expected to come regularly, who are not coming, who are facing issues and what is their academic status as of now. We can probably start planning better based on the interaction so far.

If I look at students from 2007-08 financial year point of view, I see that there are close to 70 students are on roll for FoCh. Here is the broad classification as of today:
Joined in 1st year PUC: 28 [3 boys and 25 girls]
Entered in BCom final year: 15 students [3 boys and 12 girls]
Passed BCom: 10 [All girls]
All others are one or two in their specific category.
Let me start with the ones who already completed their course.
All the BCom students [Sharada, Usha Rani, Lakshmi, Mercy, Mohana Priya, Sheela, Manju, Thenmoli, Renuka] passed with first class, but for one. Of these, Sharada [who scored close to 73% aggregate] and Usha Rani [who scored around 70% aggregate] got selected Oracle Financials. It is certainly a great achievement and hard work by them. The good news is, all other students also got some or the other job in accounting itself even before they got their results. They are happy. So are we.
Kalaivani, who was brave enough to go to Belgaum completed her diploma in nursing, passed with 76% and got a job in Vani Vilas Hospital.
Usha completed her BFA at Chitra Kalaa Parishath with 67% [my memory is too short. I am sure she got a little more than this]. In a quest of improving her skills, she joined in Master of Fine Arts at Gulbarga! Another one to go out of station for studies!!
It is equally and extremely rare to find students like Nancy [who topped her class with more than 80% in her final sem in her BE-InfoScience @ UVCE and secured a job at NokiaSiemens], Harish [who completed BE in ECE @ BMS and also got a job in Nokia Siemens], Nagarjuna [who completed his BE in CS @ BMS, got 98.8 percentile in GATE and joined MTech at IIT-Kgp], and Kiran [who completed his BE in CS @ Ramaiah, got 99.1 percentile in GATE and joined in MTech in IIT-M]. I don't think I should praise them further publicly as we have lot more expectations from them in reaching greater heights. Harish and Nancy now primarily take care of the PUC science students.
Gousiya has not been able to get her BE degree yet. However, if one wants to learn how to face difficult situations in life, fight against them and make progress, probably she is one of the best examples. After completing various mechanical CAD courses and waiting for few months to get a reasonable technical job of her domain, finally she has been able to get one. She is now even more confident and positive in her life.
There is certainly a very special place for Meenakshi too, who has not yet completed her studies. After successfully completing BSc with 72% in psychology, she joined in MSc in Bangalore University!! As Bhanu Kiran says, she is a rare gem and is probably "over qualified" for her selection for her masters admission. :-) [Her efforts require a separate write-up on her.]
Of the ones who completed BCom last year, few deserve a special mention: Leema, Jyothi are volunteering actively to give some free time to Prakash. And there is Kousalya, who manages her time extremely well, performing equally well in her BBA and volunteers at St Teresa's as well as Vatsalya! I feel all the volunteers have a lot to learn from her - at least I should.

All the volunteers are really proud to be associated with each and every one of these students. Rather, probably the volunteers are more privileged to be able to help them in some way or the other. It is always amazing to see that these kids are so brave to fight the odds and still come out with flying colours. To be frank there are some students who never turned up after we pay the fee. And some may even drop out. However, those kids who are putting sincere efforts are the ones who inspire us and ensure the efforts are going on at St Teresa's on every weekend. Without them, there is no meaning of Friends of Children.
Posted by vravi at 6:27 PM No comments: Links to this post

22nd July 2007, an Emotional day for Volunteers and Students of Friends of children Trust.

Occasion was to bid good bye to the first batch of students who joined us when the trust took birth, or rather these are the children behind the birth of FOCh.

The First Batch of students have finished their Graduation and have taken up jobs and two of our students getting into IIT to pursue M.Tech It really called for celebrations.

The specialty of the program was it was fully planned and managed by the students except for little guidance and support from the volunteers.

The day started with a Prayer 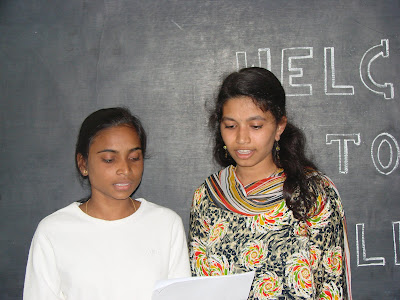 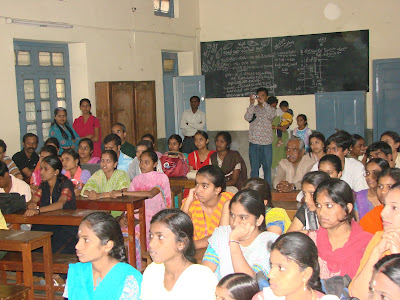 It was time for the gang Achievers to share their thoughts, motivate the new students, Cry and become emotional....( was it started by me ??, hope not )

Nancy is working with Siemens, after finishing her B.E in CSE from UVCE, Bangalore. 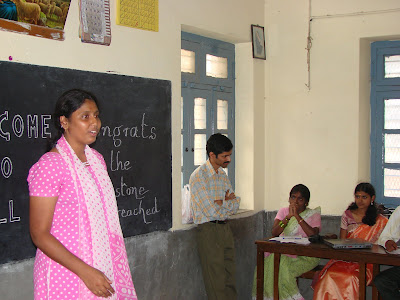 Kiran, who has been mentored for the last three years, secured a seat in IIT-Madras in MTech-Computer Science. Kiran ranked 5th in engineering entrance after completing diploma. 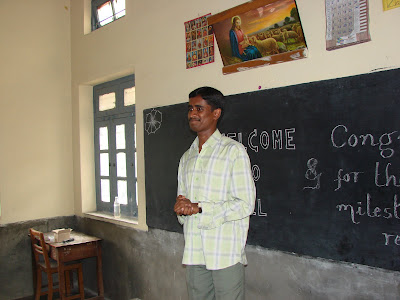 Among the guests we had were people from Oracle with whose partnership we conducted program called HOPE, Anil Birla who made an impact on our B.Com students giving them to commerce beyond academics. 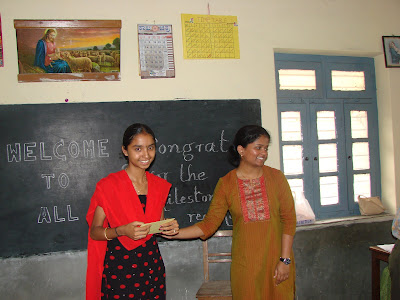 While Ravi and Prakash are proud to call out the Names 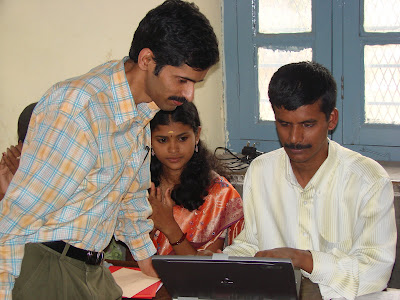 The Day ended with a BIG Group photo session and Snacks brought by BG entering their rightful place.

With this we bid Goodbye to a Batch of a Bright students to pursue their career and make it big in life. 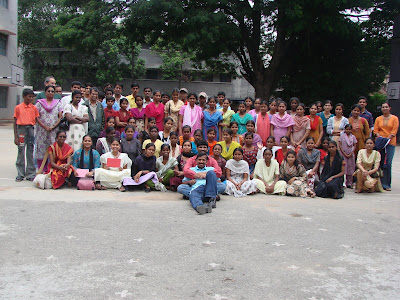 But, how could we close the day without welcoming the new Volunteers, The out going batch has taken up the mentoring of new students. It really feels great.

If this calls you to be a volunteer yourself do not hold back just drop a mail to Ravi, Shrikanth or Akash

Posted by Shrikanth Hampiholi at 3:56 PM No comments: Links to this post

A brief write-up on Disha'06, the fourth annual science fair for government high schools in Bangalore.

Posted by vravi at 11:17 AM No comments: Links to this post